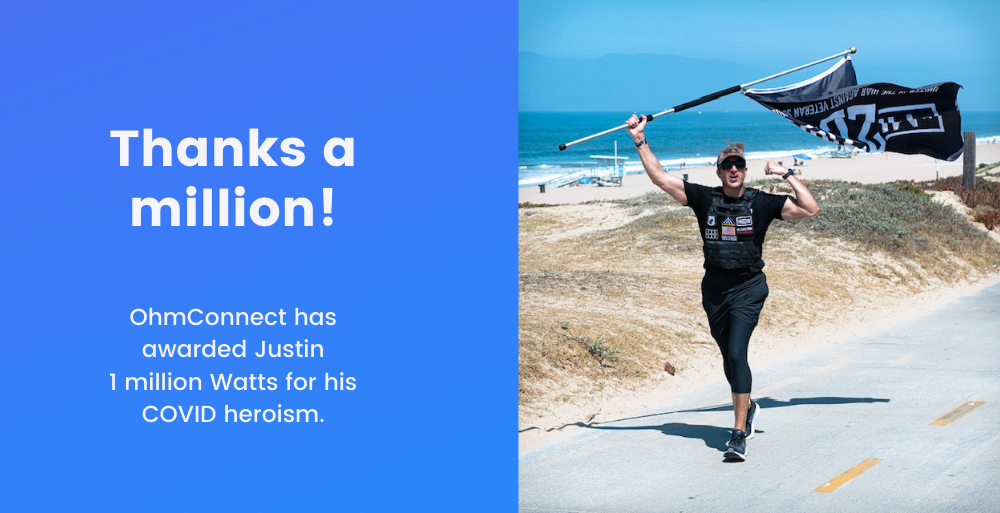 Remembering our country’s veterans is especially important to OhmConnect Thanks a Million winner Justin Gracieux from San Diego.

“My grandfather’s service records, along with 16-18 million other service member records from 1912 to 1964 were burned in the 1973 St. Louis Missouri National Personnel Records Center, so proving his service at the time of his death in 1983 was problematic,” he shared.

“Many records were damaged, scorched, and/or erased from history. Time was ticking, people requested his military documentation and he needed to be buried. Due to limited time and inadequate proof of service, he was laid to rest in a private cemetery – with no veteran recognition.”

In 2020, Justin founded an organization called Oath to Country Foundation to honor his grandfather’s 14 years of forgotten service in the United States Army. Nominated by his mother, an OhmConnect customer, Justin was awarded 1 Million Watts for his heroism during the COVID pandemic around veteran mental health advocacy.

Oath To Country Foundation is committed to fostering a community of connectivity and collaboration with partnerships and volunteers to educate on, advocate for, and strengthen military, veterans’ and first responders’ mental health and to provide street-side resources for the ones that end up homeless or low-income in Southern California. OTCF is also sponsoring combat veterans’ psychotherapy treatment sessions provided by a Board-Certified Clinical Psychologist, hosting beach yoga for mental health, sponsoring gym memberships, and 22 mile run/walk/ruck/bike challenges along the California coastline.

He began by interviewing veterans from Vietnam, the Korean War, Iraq, and Afghanistan in January of 2020, because he wanted to ensure that stories of other veterans weren’t lost, the way his grandfather’s were.

“Through these experiences, I learned a lot about war and what it does to our soldiers, so it opened up my heart to PTSD, TBI, depression and isolation, and ultimately, suicide.”

During the COVID lockdowns, he set out along the Southern California coast and started running to raise awareness for veterans mental health awareness, 22 miles for 22 veterans a day with 22 lbs.

“We lose approximately 22 veterans a day by way of suicide. One is too many and 22 is inconceivable so we need to open up the dialogue to mental health and be there to support one another when someone needs it most.”

Telling the stories of veterans and fighting for adequate mental health support and resources for those who serve or have served in the military and first responders is what has driven Justin throughout the pandemic and he plans to continue his efforts in the months and years to come.

“We’re trying to save lives - that’s what it boils down to. The message that we put out is that no one fights alone. Ever.”