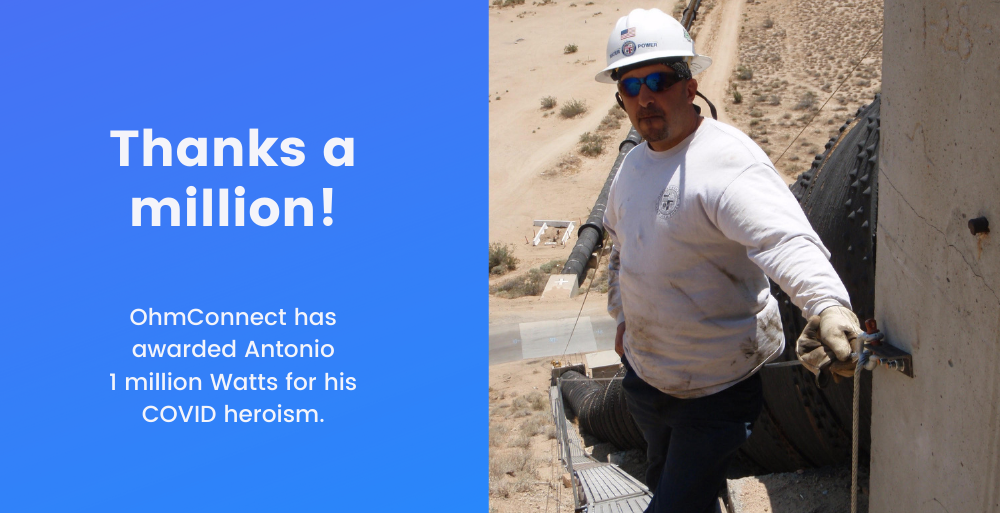 He got up every morning at 3:30 a.m. to make sure the lights and the water stayed on for hospitals and care facilities

Not all heroes wear capes -- or scrubs -- according to Elcira Oushana, who nominated her husband Antonio to be one of OhmConnect’s Thanks a Million prize recipients.

“Of course our healthcare workers have been heroic during this time,” she explained. “But it’s not just people who work in hospitals who are frontline heroes - it’s in all kinds of work.”

Antonio, a worker for the Los Angeles Department of Water and Power (LADWP) started his day at 3:30 a.m. each morning in the peak of the pandemic to ensure the lights stayed on for Californians when staff shortages were common.

“It was a scary time for everyone,” he shared. “We wore masks and we were told to stay six feet away from everyone, but when you’re in cramped spaces, that can be impossible.”

For his efforts during this tumultuous time, OhmConnect has awarded Antonio with 1 million Watts, as part of our Thanks a Million campaign.

A family man, Antonio supports not only his immediate family but also his parents and his sister-in-law overseas.

“I saw the sacrifices he made,” said Elcira. “He did everything he could to make sure his family and the families of others, as well as hospitals and care facilities had vital utilities. Without power and water, we’re not able to do anything and so he’s a silent hero to me.”

Antonio and Elcira signed up for OhmConnect earlier this year as a way to be more efficient with their own home’s utilities.

“It’s just nice to know that we’re saving and we’re doing what we can.”

And we thank you for it! Congratulations on the award, Antonio.