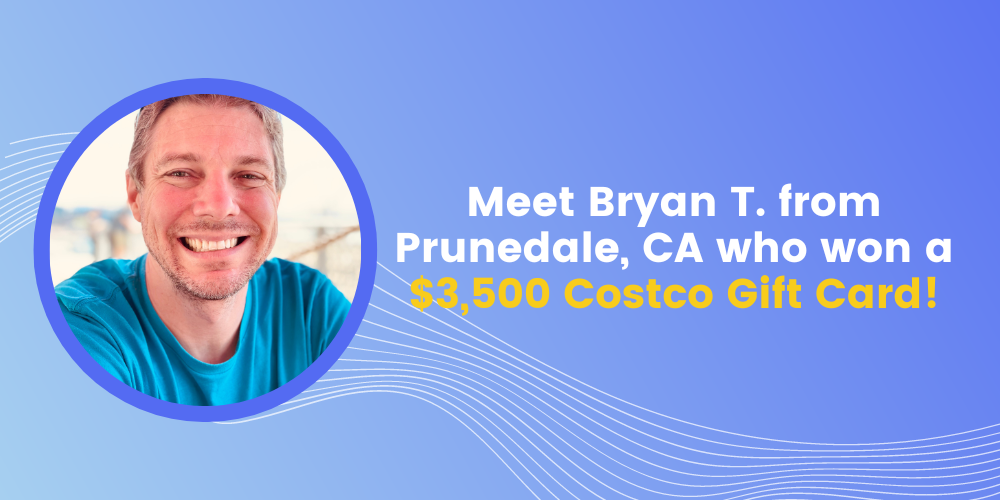 It’s been four years since Bryan T. from Prunedale, CA joined OhmConnect – a recommendation from a connection he respects on LinkedIn.

“The guy is really into tracking his energy usage and knows what he’s talking about and he recommended joining OhmConnect … so I did!”

Over the years, he and his family of four have participated regularly in OhmHours, saving energy when it’s most expensive and most polluting in his neighborhood.

“We make sure we’re not using the dishwasher or the washer-dryer during those times -- we really try to watch our energy use.”

Efforts pay off in a big way with a major prize

And this month, that diligence paid off in a big way! Bryan’s name was called as the winner of a $3,500 Costco gift card, which he opted to take as cash to spend on a vacation he and his family have been dreaming about.

Not only has he earned rewards with his OhmHour participation but his mindfulness of their overall energy consumption has led to sustained energy efficiency habits that are further reaching.

“I’m definitely more conscious about our energy usage since I’ve joined OhmConnect,” he said. “We make efforts to turn off our lights and we pay attention to what we’re using. I check my PG&E bills to see how we’re doing and we actually just got solar!

Congrats Bryan on the win and for all the efforts you make to save energy when it matters most. High five to you!