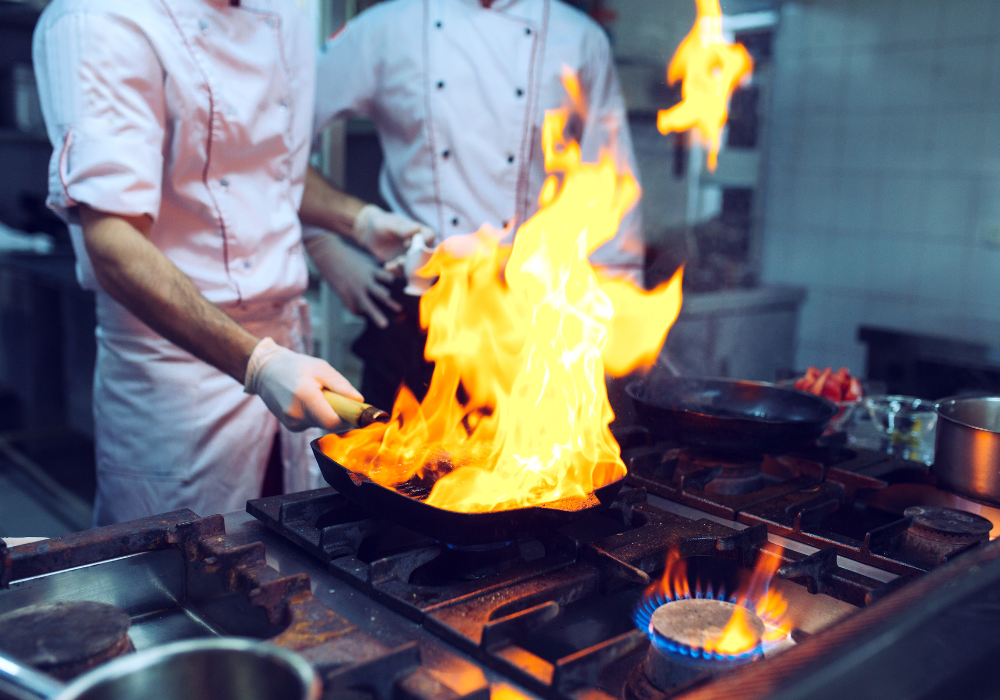 Let’s settle the debate: Are gas stoves as bad as they're made out to be?

Here's what researchers are saying.

The kitchen is often considered the hub of the home. It's a place to unwind, recharge and connect with loved ones. And no matter how you cut it, the truth is, it's one of the places we spend the most time in. But are we doing everything we can to make it a safe space for ourselves and the planet?

Most of us would answer yes to that question! You may cook a no-energy meal once a week, eat vegetarian 50% of the time, or opt for candlelit dinners during your OhmHours. But there's one key player in our kitchens that we often overlook, and new research indicates it may be a bigger culprit than we previously imagined when it comes to impacting our health and the world around us. Can you guess what it is?

You'd be right if you're thinking it's the gas stove.

For decades, gas stoves have been a popular choice in everyday kitchen cookware. In fact, one in three households in the United States still use gas stoves regularly! But in recent years, scientists and researchers have begun investigating and debating the merits of keeping these appliances in our homes. It's a hot topic! No pun intended.

And the verdict? Well, it's not great. Keep reading to uncover a few reasons why gas stoves aren’t the ideal choice for your health and the environment.

Gas stoves emit CO2 every time they're turned on, whether that's to boil a pot of water or heat the oven for a fresh batch of cookies. And the amount of carbon dioxide emitted isn't insignificant. In truth, it's estimated that gas stoves in U.S. households alone release "6.8 million tons of CO2 each year — the climate impact of 1,889,915 gas-powered cars."

And it's not just CO2 that gas stoves release into our environment. Methane gas is another significant contributor to the climate impact of these appliances. And the worst part is a large amount of these methane emissions happen when the stove isn't even on. In fact, a study conducted by Stanford University discovered that 76% of methane gas emissions from gas stoves come from leaks that occur when the appliance isn't in use.

This same Stanford study also showed that when gas stoves *are* in use, they produce a high amount of nitrogen dioxide, a gaseous air pollutant that’s toxic in large quantities. It's a concentration that exceeds the Environmental Protection Agency's (EPA's) recommended limit for outdoors within minutes. Both methane and nitrogen dioxide are big players in climate change and air pollution, contributing to smog levels and ground-level ozone — so having high concentrations of either of these gases outdoors, let alone within our homes, is undesirable, to say the least.

Gas Stoves Can Contribute to Asthma and Other Illnesses, Especially in Children

Did you know that children who live in homes where gas stoves are used are 42% more likely to have asthma? Unfortunately, it's an accurate statistic, and there are a few reasons for it.

According to the Rocky Mountain Institute, children tend to have elevated breathing rates compared to adults, often due to increased physical activity. And this, paired with smaller bodies and still-developing respiratory and immune systems, places them at a higher risk of being susceptible to illnesses, like asthma, associated with air pollution.

When exposed to high concentrations of pollutants from gas stoves, particularly nitrogen dioxide, children’s risk of contracting asthma, cardiovascular effects and more is elevated. And as a matter of fact, researchers have indicated that of the 5 million children in the U.S. currently living with asthma, it's possible that 650,000 may be suffering attacks because of the use of gas stoves in their homes.

And adults aren't exempt from the risks that these appliances present. Indoor air pollution produced by gas stoves can impact us at any age. That's why it's important to take the necessary steps to reduce our exposure, if not eliminate it.

Making The Switch: Here’s What You Can Do

It goes without saying that the easiest way to mitigate the personal and environmental risks associated with gas stoves is to simply find alternatives. Electric and induction stoves have come a long way in their functionality and have the added benefit of being better for our health and the planet. Plus, they're *way* easier to clean. Bonus!

If you want to make the switch, consider which option might be best for you. If your aim is efficiency, it's induction stoves all the way. Because these appliances are heated via induction, a process where electromagnetism is used to produce heat, they can deliver 80-90% of that energy straight to your cookware. In contrast, gas stoves only deliver around 38% and electric options about 70%.

However, with greater efficiency comes a higher price tag and induction options tend to be the most expensive on the market. So if you're looking to save money while still reducing your impact and increasing efficiency, electric stoves provide a slightly more affordable option that can get the job done just as well.

Still, replacing a gas stove with an electric or induction alternative isn't always accessible. Factors like cost may prevent many households from considering the switch. So what else can we do?

And if you need to use your gas stove? Make sure to ventilate! Open the windows in your kitchen while cooking and make sure to turn the fan on on your range hood if you have one. While this doesn't help reduce overall pollution (as both of these solutions still send the pollutants outdoors), it's a better alternative for your health and helps keep high concentrations of natural gas outside the home.

Reduce Your Impact and Get Rewarded

Ready to ditch the gas and make the switch to electric cooking? Take your impact one step further!

OhmConnect is a program that rewards you for using less energy in your home. They'll alert you to times when electricity is most expensive and polluting in your area, allowing you to plan your power usage (like when to cook your meals) and save.

Plus, as a free member, OhmConnect will take the energy you save and sell it back to the grid, sharing the profits with you. That means money back in your wallet, simply for living a more eco-friendly lifestyle! Learn more and sign-up today by clicking here.

Kimberly Hutchings is a writer, content creator, podcast host and occasional film photographer with a passion for working alongside business that are making a difference in the world. She holds a BA in Communications Studies & English Literature from Wilfrid Laurier University and a certificate in Graphic Design & Visual Communications from OCAD. Always keen to take up a new hobby, you’ll likely find her in her spare time tracking down a deal on her next getaway, scouring Pinterest for the latest cookie recipe, or quietly scribbling things down in her journal.