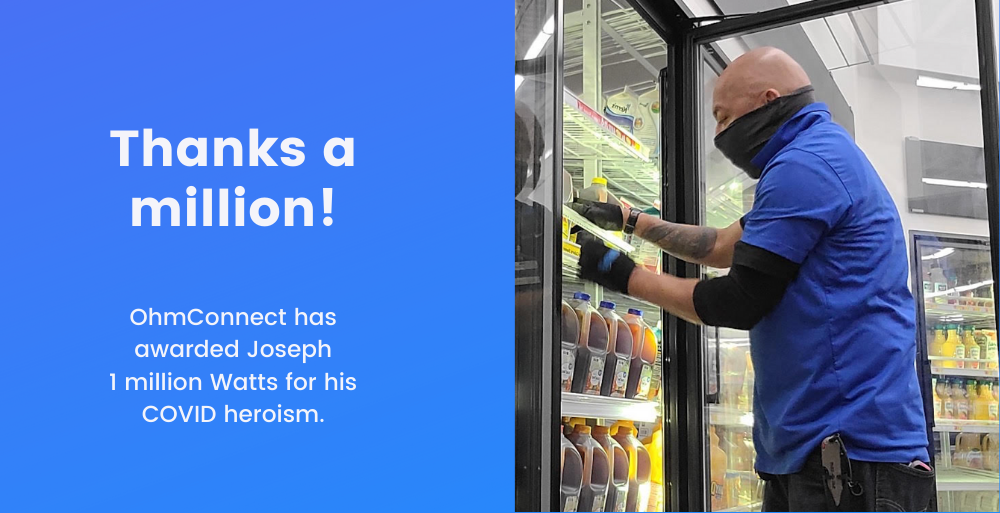 Joseph S. remembers the early days of COVID with a shudder.

“It was kind of scary,” he says. “It felt like one of those bad movies you see where all the shelves are empty at the store, like long lines wrapped around from the front to the back of the store at 6 in the morning.”

As a shelf stocker in the dairy department of his local grocery store near Fresno, Joseph had a front row seat to the early panic buying when everyone simultaneously tried to stock up on toilet paper and hand sanitizer as well as essential foods for their families.

“The juice, the milk, the eggs -- stuff would be totally wiped out,” Joseph recalls. “We couldn’t even get the stuff in fast enough.”

As part of the “Thanks a Million,” campaign, OhmConnect is honoring COVID heroes by awarding them 1 million Watts. Joseph was nominated by his wife, Sabrina.

“Working at the grocery during this time is such a thankless job,” Sabrina says. “People don’t go around thanking their grocery store person.”

Sabrina joined OhmConnect several years ago after being referred by a family member.

“It was just a super easy way to save energy and make money,” Sabrina says. “I’ve made a lot of money with OhmConnect, and I just recently got a Nest thermostat, which I love.”

When she saw the announcement of the “Thanks a Million” campaign from OhmConnect in her email, Sabrina immediately thought of her husband.

Joseph would come home after his shift and decontaminate himself with Lysol spray outside the house, before entering to strip off his clothes and throw them in the washer, then jump in the shower himself. He was trying to play it safe so as not to bring COVID home to his family.

Joseph did eventually contract COVID himself. “I lost my sense of taste, that’s how I knew I got it.” With pre-existing conditions, he knew he was at risk.

“I was very worried,” Sabrina says. “I would constantly be checking up on him. I even have an oxygen monitor for his finger because I just wanted to make sure.”

Thankfully, Joseph emerged from COVID two weeks later relatively unscathed, counting himself lucky compared to friends who have lost their taste and smell for upwards of six months.

Despite it all, Joseph never considered quitting.

“I’ve been working in the grocery for 20 years,” Joseph says. “So for me it was just autopilot. Just keep grinding. I’ve gotta make money for my family.”

Joseph’s hard work to keep shelves stocked during the pandemic deserves to be rewarded, which is why OhmConnect is giving him 1 million watts.

What’s he going to spend it on?

“My wife’s birthday is coming up, and it’s also our anniversary,” Joseph says. “She’s been wanting to go to Disneyland for the longest time, so I’ll probably do that.”