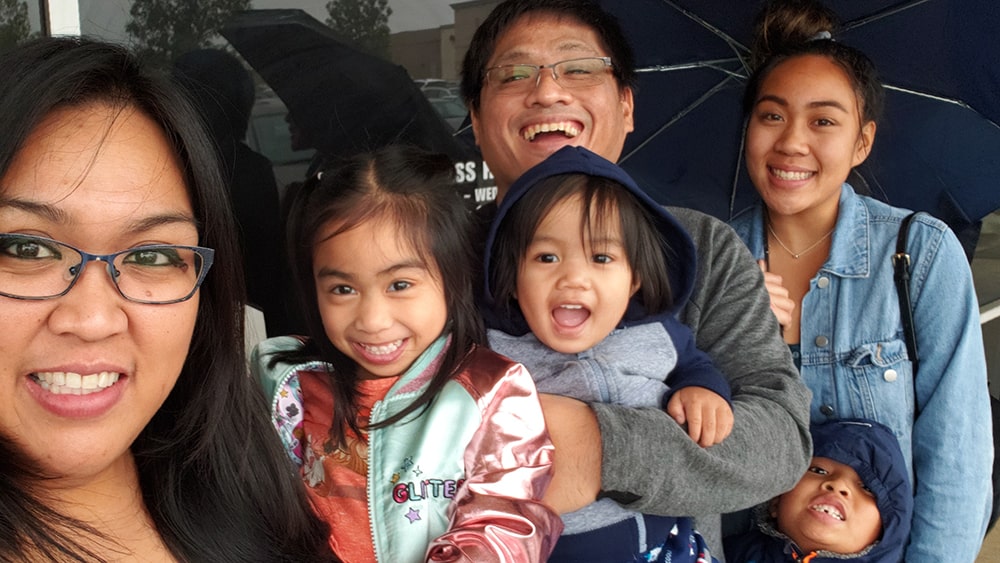 Their dedication to fully powering down during #OhmHours scored them a $5000 prize!

For the majority of OhmConnect customers, their energy usage dashboard looks something like this:

There’s the forecasted amount of energy (the grey bar) and then next to it is the actual amount of energy the family used during the #OhmHour. If a user is successful at beating their energy goal, they see the blue bar next to it.

On rare occasions, there is no blue bar because the person has actually managed to use NO energy during that time … which is amazing!

For Jasmin from San Diego and her family of six, this is a regular occurrence as they’ve made it their routine to flip their circuit breaker - Every. Single. OhmHour.

“We always flip the circuit breakers,” Jasmin explained. “Some people are concerned about if their building management wouldn’t approve or somehow it would cause damage to the breakers but we’ve been doing it for a while and everything’s fine.”

Living with her husband and their four kids in a three-bedroom apartment, Jasmin heard about OhmConnect about a year ago via a Facebook ad and decided to get her brood onboard.

“I clicked on the ad a couple times and my husband and I would discuss ‘Should we do it?’” she said.  “After about a month of seeing it in my feed we decided to give it a try. It seemed like a good thing to do to help the environment and a good incentive without any downsides so we signed up.”

With a teenager and three children under 6-years-old, #OhmHours can take a bit of planning but the family has worked out a system that earns them maximum points, and means quality time spent together.

“The kids really look forward to it! They will ask when our next #OhmHour is coming.”

Their dedication scored them $5000

Perhaps the most exciting benefit to their new unplugging routine is the prize they won during a MEGA #OhmHour last summer.

Jasmin’s username was called as the winner of a trip to Monterey during a July episode of MEGA Summer Live but decided to take the $5000 cash prize instead.

“I was very surprised when I found out I won because in this day and age you don’t really expect to actually win things,” she said with a laugh. “You assume people are trying to scam you but when I heard my name called I thought ‘Oh my goodness, this is actually happening!’”

“We are a single-income family so the money really helped us out. We have done a bunch of fun things locally with the kids and they’ve loved it.”

“Overall, OhmConnect has been an amazing experience for use as a family. As a Mom of little ones, it’s just nice to unplug and really spend time with them. It means we can do things on a more personal level than relying on technology.”

“For one hour, we don’t have a choice to turn on the TV or computer - we just spend time together and we love it.”

As an OhmConnect user, Jasmin has a unique referral code that will score her $20 for anyone who signs up on her team. Want to give her a virtual high five to say thanks for sharing her story? Sign up on her team!

San Diego Couple Makes #OhmHour Nights Date Nights - & They Get Paid To Do It!