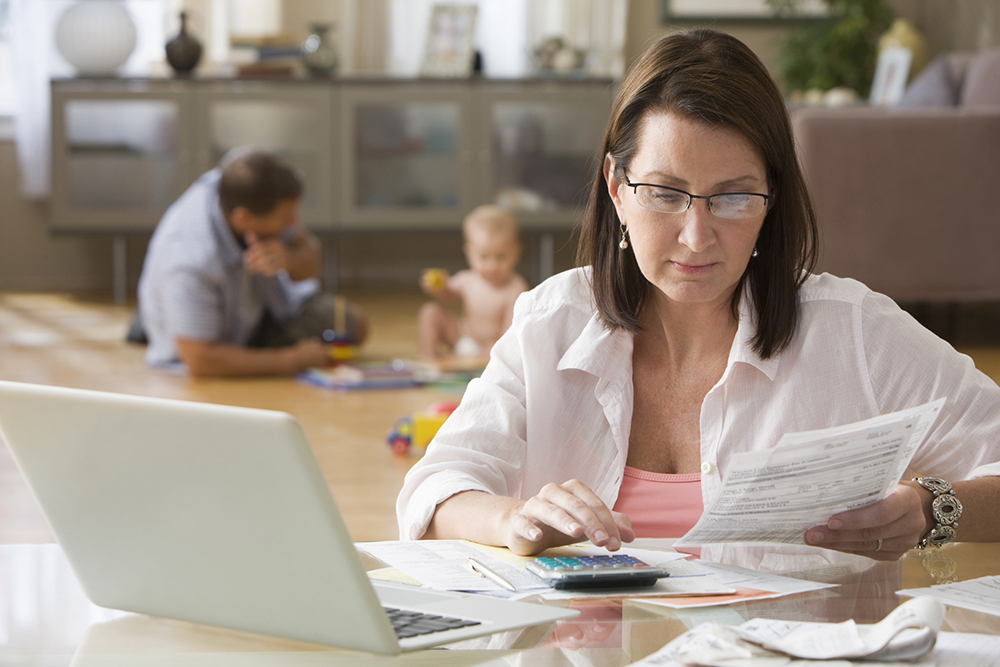 Most of us are overpaying for utilities - here's how to stop.

If you’re like the average American household, grow by Acorns reports that you’ll spend anywhere from $2,200 to nearly $4,000 this year on home utility costs like electricity, water and natural gas. It doesn’t take a mathematician to figure out that that can take a big chunk out of your family’s monthly budget.

But cutting those bills doesn’t have to necessarily mean living by candlelight or wearing a parka indoors. We found 10 relatively painless ways to cut your energy bills and one way that actually pays YOU.

Leaky faucets and showerheads aren’t just annoying, they’re expensive: A rate of one drip per second could waste more than 3,000 gallons of water per year. Considering the average $40 water bill is based on a consumption of 400 gallons per day, that extra waste can really drain your budget. So conserve water—and cash—by taking the time to fix any faulty faucets.

2. Convert your toilet to low-flush.

If you can overlook the “ick” factor, Andrew Schrage of MoneyCrashers.com, suggests putting bricks or water bottles filled with pebbles in your toilet tank, which will allow you to  use less water for each flush. “In general, you can save about 7 percent on your water bill with this alone,” he says.

Simply turning the water off while you brush your teeth can help you save eight gallons per day. That’s nearly 3,000 gallons a year.

The average electric bill is a hefty $183 a month—so every dollar saved counts. Energy Star-qualified CFL (compact fluorescent lamp) light bulbs last about 10 times longer and use 75 percent less energy than traditional incandescent bulbs. The Department of Energy says one CFL pays for itself in energy savings in less than nine months. After that, the savings go directly into your pocket.

5. Swap out your windows.

Prevent chilly winter drafts, and an unexpectedly high bill, by adding a layer of insulation with storm windows. This one requires some outlay: windows plus installation can cost $200 to $300 each, though you can reduce that cost by installing them yourself. But depending on the type of window you’re replacing, it can reduce heat loss by 10-20 percent—which can add up to some serious savings over the long run. Heating and cooling typically account for 50 percent of your energy bill.

But make sure you’re doing it right. “When it comes to your heating bill, make sure that you have your ceiling fans rotating clockwise in the winter time,” says Schrage. “That pushes the warm air downward, allowing for less use of your system for heat. Doing so could reduce your heating bills by around 10 percent.”

7. Turn down your thermostat.

Schrage says the optimal winter temp is 68—it keeps your home warm and your heating bill low. “Go down one degree at a time until you reach your ultimate goal,” he suggests. “You’ll typically save around 3 percent per degree.”

8. Better yet, upgrade to a programmable or smart thermostat.

Programmable thermostats: Using the four pre-programmed settings, which allow you to adjust the times you turn on the heating or air-conditioning according to a pre-set schedule, can save you up to $180 a year.

Smart thermostats: These little guys not only let you you monitor and control your home’s temperature from your smartphone, PC or tablet—but can help reduce your energy bill too. That’s because these devices can monitor temperature and humidity inside and outside your home, your comings and goings, and tailor heating and cooling cycles accordingly.

Get a great deal on a smart thermostat in the Ohmconnect store!

Unplug “energy vampires,” like your laptop, TV and cable box, when you’re not using them. (Leaving your computer on all day alone costs an estimated $75 a year.) You can make this task even easier by using power strips with an on/off button.

Don’t assume your utility company is billing you the right amount each month. Scan each statement for errors—whether it’s an extra charge you don’t recognize or a consumption amount that doesn’t match your meter. And ask about any discounts for opting out of mailed paper bills in favor of online statements.

11. Get paid to unplug once per week.

California, Texas and Toronto residents can earn up to $300/year (depending on your energy savings) by syncing your utility accounts to a energy-sharing program called OhmConnect and agreeing to help reduce energy usage by one hour per week.

Here’s how it works:

Plus, with OhmConnect’s new referral program, you can get paid up to $20 to help a friend save money and energy.

This blog was originally posted on Grow by Acorns. Visit their site for more money saving ideas.